Early 17th century French harpsichords have constructional details generally intermediate between the Italian and Flemish styles, but in addition the French came up with some new innovations early on.

Some of the new and unique features included the cases being typically made of walnut instead of cypress in Italy and poplar in Flanders.  Early French keyboards typically had trefoil arcades carved in to their key-ends.  Shorter key lengths and narrower octave spans made them lighter and dainty. The “reverse” keyboards having black Ebony for naturals and white bone topped sharps originated here. Natural wood or marquetry case exteriors with ormolu metalwork in the keywell were often the chosen décor.

Most importantly the 17th century French makers seem to have invented the idea of aligned keyboards making possible the rapid change of volume and tone plus the convenience of the players hands to easily cross over and under each other on separate keyboards playing independent musical lines (piece croisée). The upper manual made quite a tonal and pitch contrast to the lower as it played only the solo 4 foot stop.

Early Flemish double manual harpsichords had their upper keyboards positioned so that they were not aligned to the lower keyboard but shifted to the right and thus up a fourth. The two keyboards were not played together and their only function was used merely for ease of transposition. The tone color of both keyboards could not be varied individually from the other as they both played the same set of strings.

The desire for expressivity resulted in harpsichords having extra keyboards, knee-levers, and other stops like the Peau de buffle and other registration options. The late French instruments of the 18th century attained a pinnacle of perfection  in their own right but eventually were eclipsed due to the expressivity and ever increasing popularity of the pianoforte. 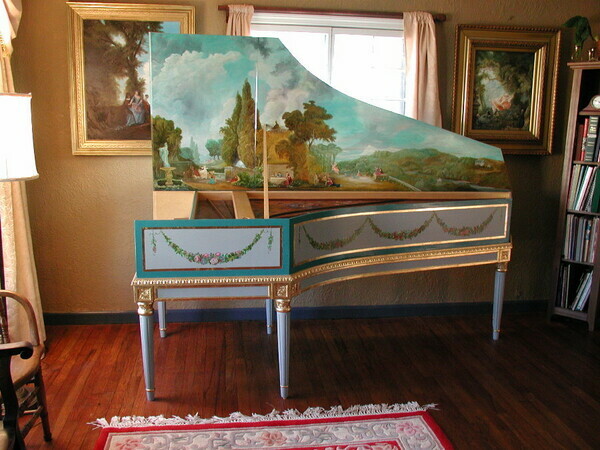